Community spaces should offer a safe and secure environment for residents and a central location for emergency services. 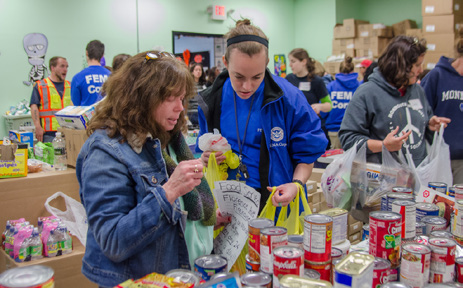 A designated community resilience space can be the location for relief efforts during an emergency.
Image: FEMA / Liv Roll.

Your resilience space might be located in an existing multi-purpose area such as a dining or activity room, where residents will feel comfortable taking shelter or receiving emergency services. 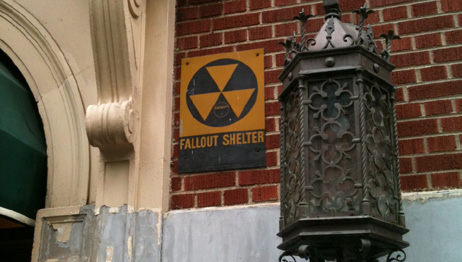 Spaces designated as fallout shelters may be ideal for a community “safe room”.
Image: Andrew Gonsalves. 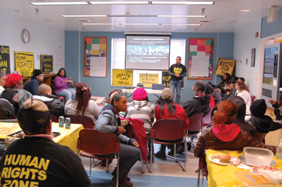 If a multi-purpose community room does not exist in your building, consider setting aside a “safe room” located above the DFE for it. Notify residents about the new resource and potential uses such as fitness classes, recreation and meetings. 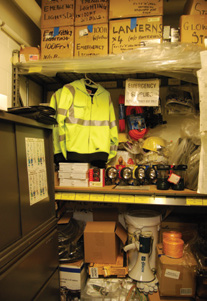 Keeping emergency supplies handy and organized is a vital function of a community resilience space.
Image: Samantha Yost.
Setting up the space.
Emergency supplies should be locked up to keep them from non-emergency use. A spare key must be on-site and several residents should know its location.
Establish your community resilience space as a neighborhood hub.

A central safe space is vital during an emergency. Consider positioning your space as a resilience hub to serve the broader community, offering translation services, medical care, food distribution and more.

A staff member should periodically inspect supplies and equipment in the community resilience space so they are ready for an emergency. Equipment not used regularly is more likely to fail.

Brookdale Village Senior Center is part of a senior residential complex operated by the Jewish Association Serving the Aging (JASA) in Far Rockaway, Queens, NY. During Superstorm Sandy, Brookdale had functioning backup systems and emergency supplies on hand, allowing it to become a resilience hub for the broader neighborhood. Of all the JASA buildings in Far Rockaway, Brookdale suffered the least damage, with no ground-floor flooding. Sixty percent of the building’s elderly residents chose to shelter in place rather than evacuate.

Brookdale has two outside emergency back-up generators mounted 6 ft. above the ground. They supplied enough power to charge cell phones, run an elevator and provide limited heating for the residential building and a smaller community center nearby. The dining room, which serves 300, was divided and used as a common space where supplies were distributed. JASA staff provided security for the common spaces.

In planning for the next disaster, Brookdale has implemented a full-scale emergency plan and staff trainings. JASA has also ordered additional emergency supplies such as cots and plans to install emergency generators in another community center to extend its ability to function as a community resilience hub.

Brookdale has about $5,000 worth of emergency supplies on hand, including stored water, blankets, non-perishable food items, batteries and a satellite radio.